Our small family finds great pleasure in the little things. So, on a recent Saturday morning when I proposed a road trip from Central through Eastern Oklahoma, along Route 66, my kids were ready to go! The plan was to begin in Stroud and finish up in Miami, OK. and then make the trek back to our home in Central Oklahoma. As with most of our road trips, we changed into our comfy clothes, grabbed a little spending cash and packed some drinks, snacks and the phone charger so we were sure to have our handy dandy GPS and off we went. 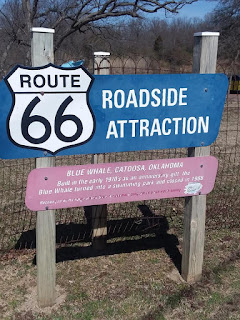 Our first stop was to the Blue Whale in Catoosa. Before we arrived, my daughter had told me she was not going in the whales belly because she was scared it would be rickety or she would fall in the pond. But as you will see below, that changed when we got there. The Blue Whale was built in the 1970's by Hugh Davis as a surprise anniversary gift for his wife Zelta who collected whale figurines. Originally calling it Nature's Acres, Mr. Davis continued to add to the roadside attraction until it eventually included The Fun and Swim Blue Whale and the A.R.K. (Animal Reptile Kingdom). The attraction also featured Hugh's brother-in-law, Indian Chief Wolf-Robe Hunt, a full blooded Acoma Indian, who was famous in his own right for his Indian paintings and as a highly skilled silversmith. Chief Wolf-Robe Hunt once ran the Arrowood Trading post across the highway from the Blue Whale attraction. By 1988, the Davises were not able to continue managing the attraction, so they closed it to the public. Davis died in January 1990, followed by his wife Zelta in 2001. The park soon fell into disrepair, crumbling from neglect and weather. However, after a decade the people of Catoosa and employees of the Hampton Inn launched a fund-raising and volunteer effort to restore the Route 66 landmark. The Blue Whale was restored and repainted to its original brilliant blue.

That's my boy waving through the hole in pic one.. and that is my daughter peering out the slide hole in pic two. Guess she wasn't so scared after all. :) 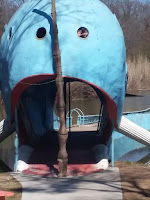 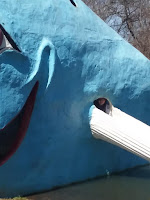 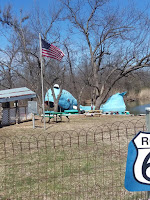 Our next stop along the famous Route 66 highway was the Belvidere Mansion. The Belvidere is located in Claremore, Rogers County, Oklahoma. Let me preface this part of the story by reminding you that this was a very impromptu trip and we were "flying by the seat of our pants" so to speak. We had never heard of the Belvidere. When we arrived, we were in awe by how beautiful the mansion was. When we entered the mansion, we noticed it was what we thought was a restaurant, but I was quickly assured that there was also the upstairs to tour! The 3rd floor was being occupied by a family preparing for a wedding so we stuck to the 2nd floor and the gift shop. You can see the age by the dark woods, the high ceilings, the claw foot tub in the restroom and just the general appearance will remind you that you have stepped back in time. It reminds me of the home we lived in back in the little town of Sonora, CA. 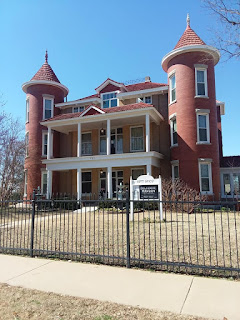 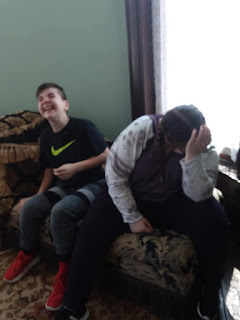 My kids were busy cracking each other up and I captured this photo of them that I absolutely love. This Victorian gem was built in 1907 by the Bayless Family. This three-story 9,000 sq. ft. home includes a restaurant, intricately tiled foyer, bathroom, and kitchen. The Belvidere's 2nd floor contains two historically furnished living quarters, a bathroom, archive room, and gift shop. The 3rd floor is a spacious 3,200 sq. ft.ballroom, which makes a wonderful destination spot for weddings, or special events, providing a scenic view of the City of Claremore.
As I would soon find out, our next stop would be my favorite. Unfortunately for me, I took only one 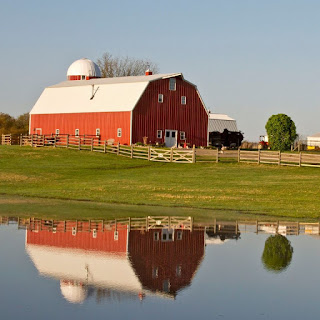 picture. So, for your viewing picture I have found a few more online to share with you. I present you Shepherd's Cross & Heart of the Shepherd. I cannot even tell you in words how much I love this place. And for many reasons! Taken from their Facebook: "The mission of Heart of the Shepherd is to teach people both local to Oklahoma and throughout the world about basic agricultural principles and how agriculture relates to the Bible. Heart of the Shepherd provides Biblically based, agricultural tours as well as providing service to those living in poverty stricken communities."

When we entered the barn, we were warmly greeted by a lady that asked us what we were interested in. I explained to her that we were road tripping along Route 66 and thought we would stop and see her place. She asked how much time we had and I let her know were not on any time constraints. We were quickly whisked away and shown the baby lambs that had just been born around 6 hours ago. She told us we could not touch them 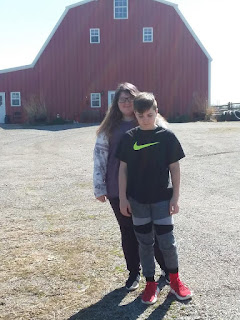 because they were bonding with the mom. Next, we were taken to where they "work the wool" as I will put in laymens terms. I never realized how much work went into those wool sweaters! Now they are all natural. No chemicals going down on that farm. They show you how wool is worked from the lamb to the sweater. WOW! So impressed! They also have a store in the barn that sells products that are grass fed, grass finished, Animal Welfare Approved and Hand Made items. Products include Amish jams, health foods, a broad range of wool products (yarn, batts, felted pelts, beautiful sheep skins, etc.), pasture raised farm fresh meat and diverse crafted items made locally and placed on consignment. The Shop also carries products made in Thailand, Malawi, and Burma; all proceeds from the sales of these items return to the women and children who made them. (LOVE LOVE LOVE this!!) If you happen to be traveling along Route 66 and you see the sign for Shepherds Cross make sure you stop and say hi!


Every now and again we hit a bump in the road. This is what happened here. In our handy dandy travel guide it said "just off Route 66" there was the Cabin Creek Civil War battle site. My son thought that would be cool, and me with my love of history, well I wanted to see it as well. So I turned off and entered the address into my GPS. Just off the road turned into twenty something miles. I figured surely this rich of history would be worth the wait right? Well friends, twenty something miles later, on a dirt road, this is what we got. A patch of land surrounded by barbed wired and a sign. Off to the next site... 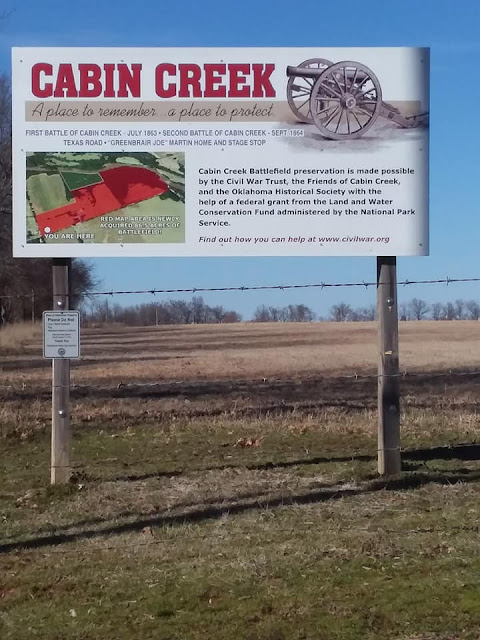 Ok, so by this time its getting later in the evening and we are getting hungry. One of the restaurants I actually did read on was this place in Miami called "Waylans Kuku Burger". It sounded like maybe it was a hoppin chain of burger joints back in the 60's and this was the last one standing. I read it looks like a cuckoo clock and actually has a  working cuckoo in the attic. 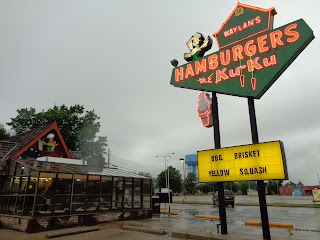 Here is a picture I found that actually shows the "kuku".. see it about the sunroom? Well, it wasn't out when we were there. Its a smaller restaurant with a home-style variety of food. My kids chose chicken strips and I chose a burger. They really enjoyed their chicken. I was not impressed with the burger. There were a lot of good reviews and some mixed reviews. Could have just been the day.

Here is my pic from our adventure: 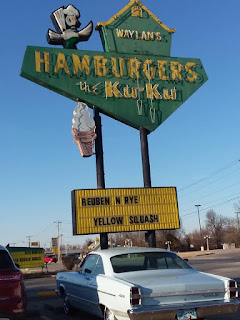 So now we have finished dinner. But what I didn't tell you is that on our way to the restaurant, my daughter saw a sign that shows 17 miles to Kansas. Now I have to tell you, my kids have only been in Oklahoma and Missouri. So, she asks, can we go? Then we can say we have been to Kansas! Its little things when your a kid folks. I've traveled through many states and have even lived in Germany. But being a single mom, traveling great distance hasn't always been easy. So yes, we headed to Kansas. And then when we hit Kansas we headed for Missouri. After we arrived in Missouri we decided to go to Arkansas. So my babies can now say they were in 4 states in 1 day! And truthfully, they were. We made memories friends. I would rather travel and have fun with my kiddos than anything else in this world. Stay tuned for more.. this year is going to hold some fun road trips ahead! My kids are 11 and 13 at the moment and I am holding on to every minute I have with them. 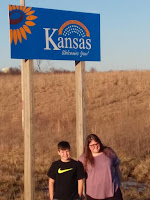 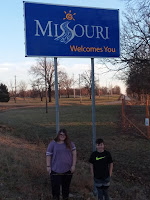 By the time we hit Oklahoma, my son was too tired to get out of the car for a pic.

Kimberly
This blog is about my journey in being a single mom of two, our adventures and much more. A California girl born and raised that has spent the last 15+ years in Oklahoma raising my babies.